So i briefly mentioned this in my last post, but this thing keeps happening more and more, and now especially since i started using the scooter: people touch me without my consent.
It's been a common theme since i started being perceived as a dude more, and increases depending on what i'm using to get around. When i had just my crutches, people would touch me. On the bus, in a cafe, walking down the street, you name it. 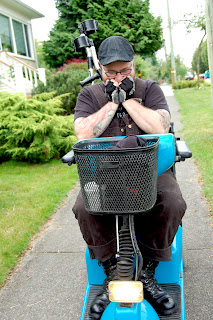 Now, in the scooter, people do it even more. i noticed today while i was out n about, that people non-consentually touched me at least 5 times that i counted and particularly noticed. Strangers touched me. Super casual acquaintances who'd never touched me before touched me. They touched me and they touched my scooter. One man stroked the arm of my scooter, and tried to lead me.
No invitation, no connection = non-consentual.
Also, people used to ask me more if i wanted "help"; now, they just don't even bother asking, they just go ahead and do it, and don't look me in the eyes while they do it. Even if their "help" actually makes things worse/ harder for me, like it did on a couple occasions today. Or they don't even bother "helping" at all. Less perceived, more perceived, less perceived, who can say?
Seems to me this is about a declining kind of visibility on one hand (my perceived worth and ability as a person based in able-bodied notions has gone down another notch), and an increasing kind of visibility (as even more of a gimp, and as extra not meeting those able-bodied standards of worth, even more in apparent need of able-bodied "help", and also in need of less consent-giving than before).
Interesting.
i'll be keeping my feelers out on this one. Have you experienced a notable shift in how people treat you in terms of consent over what happens to your body? How have you handled it? i'd love to hear some tips!


Also, just an added note: if you didn't touch me before i used the scooter, don't start touching me now unless we have that kind of connection, ok? Ask me first! Consent and all that! Thanks :)